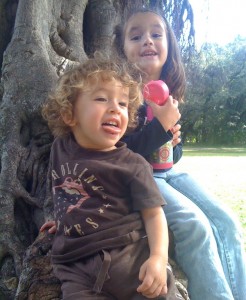 Youâ€™ve probably heard that bilingual children take longer to talk, or maybe you have experienced this with your kids. Just like you, many parents of bilingual children wonder if their kidsâ€™ language development is normal and question if learning two languages at the same time requires an extra effort or confuses them.

Children that grow up in a bilingual environment learn both languages easily, and it does not interfere with their speech development. One of the advantages of learning at an early age is that children learn different grammar rules and ways to build sentences and phrases in both languages. It is a good idea to speak to your child in the language you feel more comfortable with. If you do this, your child will learn the language well and will develop good pronunciation.

At an early age, children learn very quickly and with no difficulty. If you already speak to your child in your first language (either because you chose to or because you donâ€™t master the English language) and worry that your child will be behind in learning English, donâ€™t worry, your child will learn the language just by living in an place where this is the official language. And if your kids do not have too much contact with the English language at the moment, either because you live in a community where only your language is spoken (and even the TV is in that language), the moment your kids start going to day care or school, they will learn English in no time.

Several studies have proven that up until they are ten years old, children can learn a second language with the same ability as their first language and without an accent. Perhaps your child says only a few words in English and seems to speak less than children his age, yet if you add the words that he/she also knows in the other language, he will most likely be in the expected language stage for his age.

And what about a third language?

There are families in which more than two languages are spoken because both parents are from different countries where English is not the first language and live in the U.S., or because one of the parents speaks more than one language, or simply because they want their kids to learn a new language. Regardless of whether the child learns a third language at home or at a learning center, the greatest advantage is for him to start at an early age. Children have the ability to take in and retain information in their early years, which allows them to familiarize easily with new words and sounds.

The most natural way to learn a language is the way we learn our first language, repeating sounds, words and understanding before reading and writing. Some parents wonder if itâ€™s better to wait until their children master the first two languages before starting with a third one. But as mentioned earlier, a child can understand and eventually speak a third language at a young age, without necessarily knowing how to read or write. The way children learn a language is very different to the way adults do. The latter start by learning grammar rules while children first learn by imitation.

So it is never too late to learn a language, and the younger, the better, that way your child could learn easily to speak several languages fluently. It is important to note that studies have shown that children who speak several languages are more creative, imaginative and do better in math and science. A recent article published by abcnews.com on bilingual babies exemplifies this: â€śThink of an apple, and then think of the word Â«apple.Â» If you speak only one language, you associate the object (the apple) with that word, and only that word. But, for example, if you know three languages and three words for Â«apple,Â» the words become more like symbols to you, similar to the symbol Â«xÂ» in an algebraic equation.â€ť

Sharing our culture and our language is a precious gift that we can give to our children. More than tradition, you are also offering them a unique experience. In todayâ€™s world, it has become increasingly important to speak more than one language.
Learning to speak the parentsâ€™ language will give children the opportunity not only to communicate with their parents and grandparents, but have an advantage in the future of knowing about another culture, being able to communicate with more people and have an open mind and wider view of the world that will offer them great opportunities in their personal and professional life.